James Garner always had that kind of optimistic cynicism that let the audience know he had the score, he felt like there was no point to all this nonsense, but that he was sticking around to see how everything was going to turn out. Such an attitude made viewers want to linger in front of the screen, whether television or silver, just to see what would happen, too. 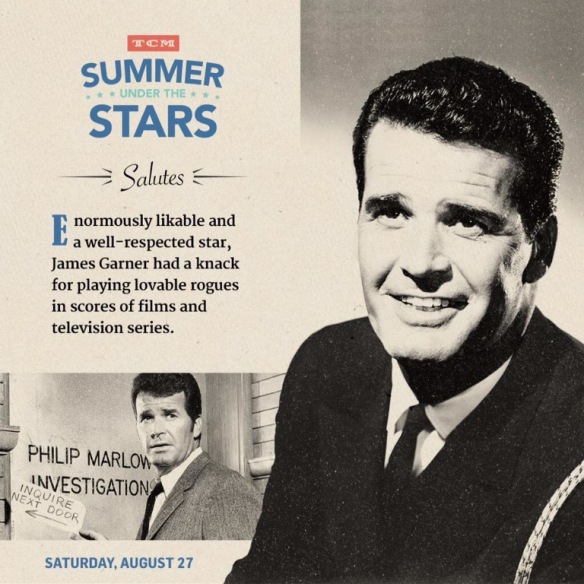 This article is part of the Summer Under the Stars Blogathon on Journeys in Classic Film: https://journeysinclassicfilm.com/2016/07/14/the-2016-tcm-summer-under-the-stars-blogathon/

Garner first appeared in my orbit in episodes of Maverick on our bulky black and white entertainment center, and the cocky way he would push back his Gambler-style Stetson made me realize that I was as skeptical as his character was, but I was also sticking around to see what would transpire. Garner’s ability to shape shift, beginning on television, switching to film, and going back and forth between the medium for decades reveals his everlasting appeal as a performer and his undeniable versatility for decades. Since I am a cinephile and TCM enthusiast, I feel assured that everyone will find at least a few of their favorite Garner films on TCM today.

What are my favorites? I always enjoy his films with Doris Day, and even Day remarked during her TCM interstitial that since she and Garner appeared so compatible with each other during The Thrill of It All and Move Over, Darling, fan actually thought Day and Garner were married. But my absolute delight over “The Americanization of Emily” always brings me hope that this film will be screened at a TCM Film Festival. Focusing on the D-Day invasion of Normandy, and other initiative in the European Theatre during World War II, the scenario, by ace scribe Paddy Chayefsky, reveals another tour-de-force performance by Melvyn Douglas, grandfather of TCM host Illeana Douglas. The palpable chemistry between Julie Andrews and Garner makes Chayefsky dialogue sizzle in Garner’s most romantic adult collaboration.

If you enjoy James Garner, here’s a viewer’s opportunity to revel in his good looks, his characterizations, and his ability to relate to the absurdities of life. TCM’s Summer Under The Stars Celebration has chosen to honor James Garner on Saturday, August, 27, with a special selection of Garner’s films, both serious, comical, and farcical with selections appearing from the website:
MISTER BUDDWING (1966)

A man suffering from amnesia confronts a series of women in his search for his memory.

A married couple’s working vacation in Paris turns into a battle to stay faithful.

This behind-the-scenes short offers a look at the D-Day special effects created in filming “The Americanization of Emily” (1964).

AMERICANIZATION OF EMILY, THE (1964)
A British war widow falls for an opportunistic American sailor during World War II.

THRILL OF IT ALL, THE (1963)
A doctor tries to cope with his wife’s newfound stardom as an advertising pitch woman.

Nazis kidnap a key American intelligence officer and try to convince him that World War II is over.

HOUR OF THE GUN (1967)
Wyatt Earp tracks down the survivors of the Clanton Gang after the gunfight at the O.K. Corral.

SUPPORT YOUR LOCAL SHERIFF! (1969)
A cowboy drifts into a lawless town and brings things back together.

Thrown together by the Germans, a group of captive Allied troublemakers plot a daring escape.

RECOMMENDED:
“Action on the Beach” is an informative interstitial with special effects and creative recreations that highlights the one-of-a-kind D-Day sequences for “The Americanization of Emily.”

If you miss any of these films highlighted today, check out TCM Mobile for a replay. Read James Garner’s autobiography with Jon Winokur, The Garner Files, published in 2011.

TCM’s Summer Under The Stars biography of that “lovable rogue:”
http://summer.tcm.com/day-27/james-garner/bio