The director of Airport, the biggest Universal blockbuster in 1970, whose $45 million in earnings wouldn’t be topped until Spielberg’s Jaws in 1975, and a character actress with 6 nominations had a connection that made history for both of them.

George Stenius, whose family hailed from Stockholm, grew up in Detroit, and he was determined to be an actor and not go to college, so he joined a stock company and also dabbled in radio. Credited with creating the “High Ho, Silver!” sound byte glorifying The Lone Ranger on radio because he couldn’t whistle, Stenius, who had changed his last name to Seaton because it was easier to pronounce, had the pluck to send his play to none other than MGM’s Irving Thalberg.

Thalberg may not have been as interested in the play as he was in the creative potential of young George, whom he hired as a $50 a week assistant to Ben Hecht and Charles McArthur so George could learn more about his craft, which was not a bad place to start for a newbie. Unfortunately, the MGM team Hecht/MacArthur soon parted company and George didn’t see Hollywood for awhile.

But George Seaton kept plugging away as a gag writer, a fixer, and a man with creative stories. His uncredited days were soon to be behind him as Groucho Marx liked what he came up with for A Night At The Opera, also starring Kitty Carlisle. Marx took him on board for the next Marx Brothers project as a collaborative writer on A Day at the Races, and soon after, he worked for a short while at Columbia and became affiliated with producer William Perleberg, who latched onto Seaton as a protege. Perleberg then joined 20th Century Fox in the early forties and Seaton went with him.

One of Seaton’s first assignments at Fox was the screenplay for the box office hit, The Song of Bernadette which initiated his long career as a successful screenwriter, director and producer.

Various projects followed, and eventually he worked on a period comedy with Betty Grable, but unfortunately, The Shocking Miss Pilgrim was a shocking failure even though it sported songs from George and Ira Gershwin. But as with all failures, everyone usually learns something.

For Seaton’s next project, he wrote the screenplay, and it more than made up for the failure of his last picture. Viewers still scream for it every year in December because of the story, because of the characters, and because of its endearing charm. And one of those endearing charmers was someone agent Meyer Mishkin found named Thelma Ritter. “Meyer was my agent, and he found Thelma for George,”according to actor Marvin Kaplan, who also appeared with Ritter in A New Kind of Love, a film that starred Paul Newman and his wife, Joanne Woodward. TCM Host Robert Osborne also commented during Thelma Ritter’s Summer Under The Stars comments prior to The Model and The Marriage Broker on Wednesday, that Ritter and Seaton were friends.

Officially uncredited in the cast of Miracle on 34th Street, but unforgettable in moviegoer´s memories as “Peter’s mother,” Thelma Ritter elbowed her way to the focal point of viewers’ memories, especially as she told her son something like “Momma wants to talk to Santa, now” after Edmund Gwenn, as Kris Kringle, had promised Peter a fire engine that his mother knew she couldn’t deliver by Christmas morning. Ritter has charged through cinematic history like a a steam roller ever since she had been given her big cinematic break by Director George Seaton, the man who was plucked from obscurity by Irving Thalberg, and cut his writing chops with none other than Ben Hecht and Charles MacArthur, of Front Page fame.

Born in Brooklyn, New York, in 1902 on St. Valentine’s Day, Thelma Ritter’s auspicious entrance on the day heralded as the most romantic day of the year meant to many classic cinema fans that she would be loved for her endearing, no-nonsense charm, and for telling it all like it is.

Ritter also studied at the American Academy of Dramatic Arts in New York, and trained there as an actress. Her husband, Joe Moran, an executive with Young and Rubicam,  was also Ritter’s agent, and they had two children, daughter Nikki, who also was an actress and appeared with her mother in a production of Barefoot in the Park in 1966, and son Joseph Anthony Moran, who liked to be called ‘Tony.’

In my exclusive interview with Tony last year, he revealed that “I just saw Miracle on 34th Street a few weeks ago,” and for the few moments that his mother was in the film, “she just jumped off the screen,” and “took over the whole show.” 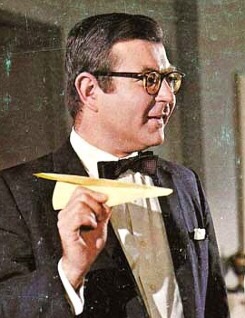 In a recent interview with actor Marvin Kaplan (It’s A Mad, Mad, Mad, Mad World), he reminisced and revealed that Ritter was never “on” when she was present at a production, but was always prepared and a “pro,” indicating that she was confident about her part and thoroughly prepared. Kaplan claimed that “whenever Thelma was in a movie, I made sure that I went to see it” 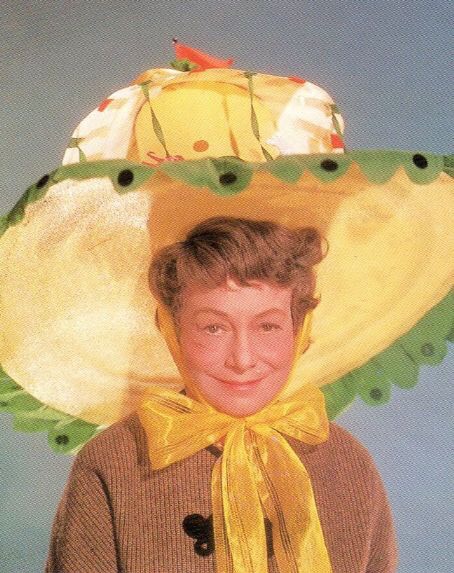 Thelma Ritter wears a hat to celebrate St. Catherine’s Day during an event in A New Kind Of Love…

Ritter mainly participated in dramatic endeavors while living and working in New York and appearing on television and in theater, but when she came out to Hollywood, ¨she mostly did comedies.” Kaplan also remembers that screenwriter and playwright Paddy Chayefsky “especially wanted Ritter” for the Goodyear Playhouse production of A Catered Affair in 1955.
In 1951, she appeared in All About Eve, and writer, producer, and director Joe Mankiewicz admitted that he liked real people “like Thelma Ritter,¨and believed that ¨Thelma Ritter was the best. I wrote Birdie Coonan in All About Eve for her. A wonderful person and a fine actress. I loved her, bless her. Do you remember that scene in Letter to Three Wives when Ritter and Connie Gilchrist are playing cards? I loved that.¨

Special attention from Joe Mankiewicz anointed Ritter as the go-to-gal to keep audiences focused on the silver screen, and when Ritter appeared in Sam Fuller’s Pickup On South Street, Richard Widmark recalled in Lee Server’s book, Sam Fuller: Film is a Battleground, that “I liked Thelma very much” as he “knew Thelma from the radio days back in New York. She was always a wonderful actress and a terrific lady.”

According to actress, singer, and comedienne Debbie Reynolds, the next SAG/AFTRA Lifetime Achievement Recipient in 2015, Thelma Ritter was one of the greatest scene-stealers that she ever worked with. In Reynolds updated autobiography, Unsinkable, Reynolds claims that Walter Brennan, Walter Matthau, and Thelma Ritter were all in a class by themselves and that “you couldn’t turn your back on any one of them…I’d say it was a three-way tie for who could get the most out of their camera time.” Ritter’s son Tony also revealed that “Debbie and she were very close, and when my Mom died, she called and called and wanted to know if there was anything she could do.”

In an exclusive interview about Thelma Ritter with Christa Fuller, Director Sam Fuller’s widow, Christa states that “Sam adored her. She should have won an award for her touching portrayal in Pickup On South Street.” Filmmaker Samantha Fuller, the director’s daughter, has recently screened A Fuller Life, the ultimate documentary on the life, work, and times of her father at MoMA from August 6-16.

According to esteemed Senior Researcher Alexa Foreman from Turner Classic Movies headquarters in Atlanta at Turner Studios, Thelma Ritter “is one of our ‘unsung heroines’ of movies. She never gave a lackluster performance and was nominated for an amazing SIX Academy Awards. One of the all time great character actresses.”

Ritter’s son, Tony Moran also shared that “evidently, everybody identified with my mother. She would tell it like it was. She was like that in real life.”

Fans of Thelma Ritter can immerse themselves in many of her stellar performances on Wednesday, August 20, all day on Turner Classic Movies. Some of her films will also be added to the TCM Mobile.

A few of the many blog articles focusing on Thelma Ritter:

Much of the narrative to the making of Miracle on 34th Street has been expanded. Read more about it after the publication of Thelma Ritter’s biography.

Christina Putnam is currently working on Thelma Ritter: Hollywood’s Favorite New Yorker to be published in 2020 by the University Press of Mississippi.