Reflections on a Life in Cinema

The fans at #TCMFF in Hollywood celebrated Alicia Malone’s newest book, Girls On Film: Lessons from a Life of Watching Women in Movies.

Malone’s latest book reveals her journey as a young film lover to a film writer and explores her innermost longings to share the delight of classic cinema the cinematic world at large. Her job as one of the hosts of Turner Classic Movies has allowed Malone to speak with authority about films she loves.

The 206-page text of her personal experiences reveals her first film at three-years old- The Never Ending Journey, The air-conditioned comfort of the theater in Canberra, Australia, began her interest in film and her obsession with horses. Her shyness and her ability to interpret her emotions reveals the deep-seated need for self-expression that has helped Malone move to the forefront of her profession. Malone’s teenage friend, the film that frightened her the most, how she organized her determination to become a host at TCM, and her latest inspirational project reveal the woman behind the hosting duties.

Her interpretation of Gentlemen Prefer Blondes highlights how Lorelei Lee and Dorothy Shaw avoid competing with each other and support one another throughout all their adventures in the film. The Bad and The Beautiful, The Enchanted Cottage, many foreign films, and Imitation of Life are discussed with care and devotion. Malone also discusses working on press junkets and some of her brushes with well-known celebrities.

If you enjoy Alicia Malone’s films comments on TCM, or her other books, reading about the personal journey she embarked upon at an early age will be worth your time and money.

You can order a signed copy of Girls on Film from Larry Edmunds Bookshop.

TCM Film Festival Guest and TCM Cruise favorite Debbie Reynolds appeared onscreen last evening in another royal blue suit (not this one!) looking lovely. That shade is so complementary and illuminates how vibrant she still is…

The Debbie Reynolds Auction Preview Party was live-streamed on USTREAM for the Hollywood Motion Picture Experience last night from The Debbie Reynolds Studio in West Hollywood. Reynolds was being interviewed by host Steven Sorrentino, with comments from time to time from her son, Todd Fisher, who was wearing a cap and t-shirt, and running around organizing guests and comments. Reynolds discussed the “Gone With The Wind” furniture, Charlie Chaplin’s hats, a carved, wooden buffet used in several Tyrone Power swashbucklers, posters, and dresses. Reynolds, remarking she had fallen earlier in the week and hit her head, even did her impression of Mae West (It’s still spot on!) Son Todd arrived with water for Reynolds, and his wife, actress Catherine Hickland, came to visit with play-by-play host Sorrentino about the collection while Reynolds took her break and did interviews with other media representatives. An open bar helped insure all the patrons were happy, and viewers were able to watch it for free online by following this link: http://www.ustream.tv/channel/hollywood-motion-picture-experience-presents

Fisher chatted with Stan Freburg, recording artist, comedian, and author, and right before the break, he reminded viewers that Reynolds had to leave to take a break and do a few interviews. Later on in the evening, an online drawing, entered by more than 1500 auction bidders, afforded one lucky participant an extra $1000 to use for bidding on the item of his or her choice. (Colleen from Minnesota was the winner. Two soft-cover catalogs were also awarded as 2nd and 3rd prizes.) Reynolds picked the winning slip out of a silver punch bowl.

After one of the interviews, the online audience was treated to a live-streaming of the “action” as patrons mulled around the exhibit in view of a stationary camera. A pianist was playing “Somewhere in Time” and helped everyone feel in a more expansive mood so that preparing a bid on a favored item wasn’t such a stressful activity. The live feed camera then settled on the “Gone With The Wind” chairs, and the cherubs on the mirrors that were so lovingly restored by Reynolds’ father were readily visible.

Sorrentino, who also offered his Sammy Davis impression while extolling the virtues of the Rat Pack suit colllection, and Reynolds also chatted about two lovely wooden/gilt mirrors that her father helped restore. She purchased them at the MGM auction, and they had been in several Judy Garland movies. Reynolds said it took her father about a year to completely restore them. After her interview, the live feed camera settled on the “Gone With The Wind” chairs, and the cherubs on the mirrors that were so lovingly restored by Reynolds’ father were readily visible.

All of these items were professionally well-preserved. Reynolds explained that Fisher carefully inventoried many of the costumes, and removed the labels which kept the clothing acid free, and she also stated that they consulted the experts at The Smithsonian about proper storage and restorations.

Also during the interview, I think I saw the portrait of Greer Garson from “Mrs. Parkington,” and then I saw the Norma Shearer dress from “Romeo and Juliet.” While they had some tech problems with the live feed sound, and Sorrentino kept trying to locate which camera to pitch to, Reynolds kept chatting and posing for photos with visitors. Laugh-In’s Joanne Worley, Dick Van Patten, and Reynold’s Thalians pal Ruta Lee were reported to be in attendance, but I never saw them onscreen.

Cameraman Roy Wagner, a good friend of Fisher’s, discussed some of the historic cameras featured in the auction with Todd. The Aikley camera Oscar-winning Cameraman Linwood Dunn owned was used on “King Kong,” “Citizen Kane,” and was used for many RKO films. The Vista Vision camera in the auction is one of the few remaining working Vista Vision cameras, and filmed special effects for the “Star Trek” television series, and many classic films like “Funny Face” with Audrey Hepburn. Wagner discussed the “six-foot” rule during filming (a safety zone which allowed only the Director of Photography within the 6 foot perimeter circling the camera while in use). Wagner also discussed the magic of the box and what each camera had experienced in its varied history.

Daughter Carrie Fisher supposedly made a quick appearance early in the evening.

The last of the lots go on the block this weekend.

Don’t forget to have some fun! 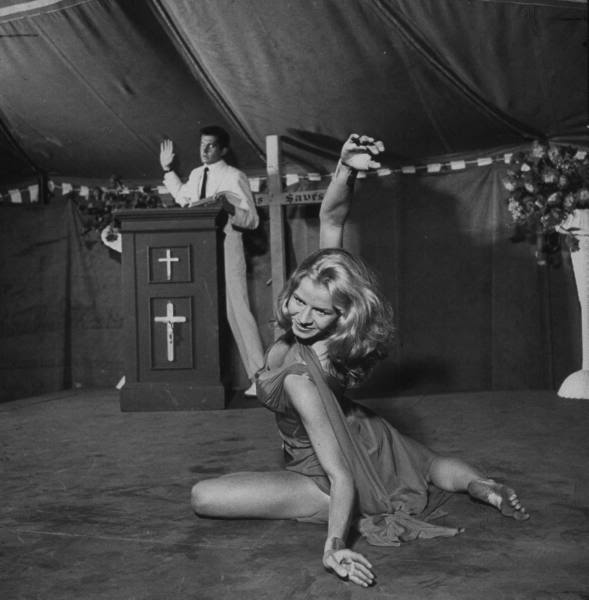 Salome Jens enthralling her audience as George Hamilton performs at the pulpit….

Richard Anderson’s introduction to Seconds also revealed that he felt Salome Jens was a wonderful actress. And viewing that film at the Turner Classic Film Festival 2012 peaked my interested in a woman whosecareer encompassed many film, television, and stage successes. Her face is familiar to many because of her myriad of guest starring roles in series like Star Trek: Deep Space Nine, appearing as the Female Shapeshifter, or Melrose Place as Joan Campbell.

She also appeared in Tales From the Crypt, Falcon Crest, Mary Hartman, Mary Hartman, Medical Center , Stoney Burke, The Outer Limits, The Untouchables, and one of the more unusual episodes of Gunsmoke,entitled “Captain Sligo,” with Richard Baseheart in the title role, staple character player Royal Dano, and director William Conrad, who was the original Matt Dillon on the CBS radio show.

Jens’ quirky, often off-beat characters did much to advance her incertain non-traditional roles, but her portrayal of Nora Marcus as thefree-wheeling, grape-stomping paramour of Rock Hudson’s reformed Arthur Hamilton enjoying his new found “freedom” in the up-and-coming Malibu  counterculture, is one of her signature roles. As Nora Marcus, she  is mysterious, passionate, and willing to lead Arthur Hamilton into allkinds of adventures, some of which occur on screen in the actual Malibu  home of Seconds director John Frankenheimer.

Her 1961 starring role in Paul Wendkos’s Angel Baby is considered Wendkos’ best directorial effort, and a cult favorite with fans of Salome Jens. Wendkos, famous for the Gidget franchise The Legend of Lizzie Borden, starring Elizabeth Montgomery, and A Woman Called Moses, starring Cicely Tyson, was hard-pressed not to release Angel Baby, and it was “shelved” for a year to help ensure the success of a similarly plotted Columbia effort entitled [b]Elmer Gantry[/b], which propelled Shirley Jones to her Oscar win as Lulu Bains.

Angel Baby not only marked the debut of Ms. Jens as a woman who believes she has been selected by God to alleviate the suffering of others with her healing skills, but it also allowed a young Burt Reynolds his first film credit before his stint as “Quint” on Gunsmoke a year or so later. George Hamilton, as Paul Strand, is a greedy promoter who supposedly cures Jens of her affliction, and Mercedes McCambridge is his wife who also exploits the innocent.

Salome Jens will star with Andrew Prine ( Bandolero, The Miracle Worker, Chisum) in Glendale Centre Theatre’s On Golden Pond, July 12-August 11. Jens has previously appeared in many productions, and the New York Times called her one-woman show  About Anne, incorporating the poems and words of Anne Sexton, ” a magnificent moment of theater” and states that her “rich and brilliant performance gleams in the memory.” (Anyone living near Glendale, California, might want to order tickets to see Jens and Prine emote in [b]On Golden Pond [/b]at 818-244-8481.)
Watching Seconds made me so curious about Salome Jens because I had seen her in so many movies and television classics, and I had to find out a little more about this fascinating feature player.

Discussing her performance with Geraldine Page in Barefoot in Athens, a play about the death of Socrates, which first appeared on Broadway,  and aired in 1966 on NBC,  Jens claimed Page  was “fierce” and always worked “on the edges.” She also  reveals she was “moved, moved  humanly” by Page’s performance. Barefoot in Athens also starred Peter Ustinov as Socrates. After watching the print of Seconds at the Turner Classic Film Festival in April, I feel that Jen’s performances move viewers humanly and motivated me to find outa little more about her and her performance in Seconds, which helped make it a classic, cult or otherwise.
Maybe Salome Jens will be asked to appear at the Turner Classic Movies Film Festival 2013 to introduce another screening of Seconds, or even Angel Baby.